Stockholm: variations on a theme

I have finally got around to editing all of my photos from our trip to Stockholm around New Year. I have been way to busy with work, setting up a media server in my home and loading it with all our music and DVDs and lots of other stuff. 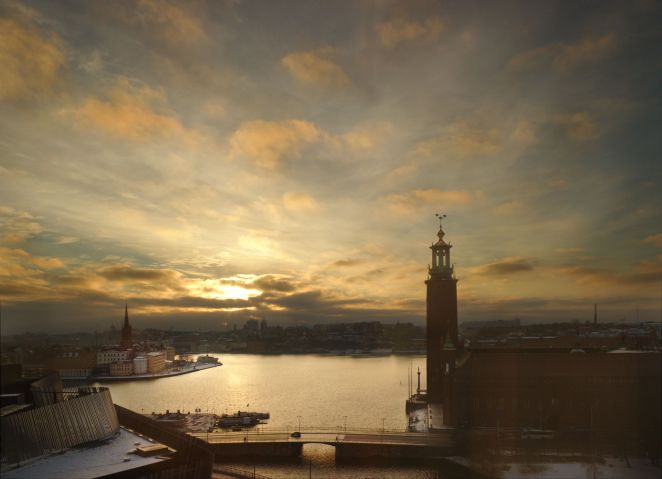 When looking through my photos I found that a majority of them were of the City Hall, one of Stockholm’s most famous buildings. It dates from 1923 and was designed by the architect Ragnar Östberg.
The photo above was taken from our hotel room on the 14th floor a while after sunrise, when the sun was colouring the scattered clouds in a beautiful golden tone. I bracketed the shot, intending to make an hdr image. When I saw the result I didn’t like it too much. It was kind of flat and boring. So I opened it in Gimp and also opened the under- and overexposed images as layers. It turned out that the overexposed image was perfect for the foreground and the underexposed one was perfect for the sky. So all that in the end remains of the hdr is the narrow strip of land in the background and the City Hall tower. I also did a little dodging and burning to emphasise parts pic the image.

The next photo was taken a while after sunset, while there was still a little bit of light in the sky. This one was also bracketed and made into an hdr, and this time most of the hdr image survived. The nearest wall of the building and most of the foreground was taken from the normally exposed image.
Later in the evening, when it was time for the fireworks, I didn’t take out my dslr. Instead I took some shots with my phone. You can see my favourite here.