A summer night in the mountains. Part 1/2, Sunset

This summer I had a few days to my self at our cabin in Valdres, Norway. One day I decided to drive to Valdresflya, which is a mountain area just outside Jotunheimen National Park. I wanted to spend the night there, so I could get both the sunset and the following sunrise. I also wanted to sleep in my car. That was not very comfortable, but it made it easy to get up for sunrise.

So I drove north towards the sinking evening sun. My goal was to photograph a mountain called Bitihorn, which lies as a watch post at the entrance of Valdresflya, just where the road passes through Båtskaret (Boat Pass). Nearby is also the lake Bygdin, with a hotel by the shore, another potential photo location.

Just before the hotel, there was something holding up the traffic. It turned out to be a herd of cows on their way home for the evening, longing to get milked. 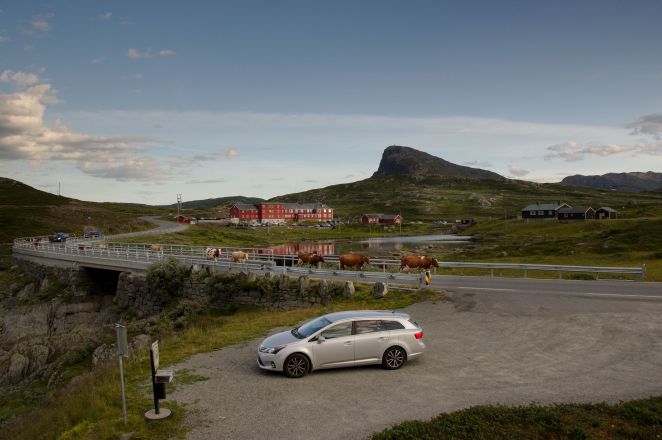 Cows passing Bygdin Hotel, with Bitihorn in the background.

Just after passing the cows, I noticed a low ridge to the right of the road. I thought it would provide good views of both Bygdin and Bitihorn, so I found a place to park the car, put on some extra clothes, grabbed my camera bag and went for a short hike up the ridge.

I noticed an area with some nice yellow flowers covering the ground. In the background, Bygdin was stretching out into the distant mountains. Some nice, puffy clouds were just starting to catch colour from the setting sun, even though it still was an hour until actual sunset. This scene called for a wide angle shot with lots of depth of field. I set up my camera with the Sigma 10-20 mm f/3.5 at 14 mm focal length and an aperture of f/11. This meant I needed an exposure time of 1/10 s for the foreground. I’m not too good at remembering which graduated filters I end up using, but I think I ended up with my 4-stop hard edge filter to darken down the sky. 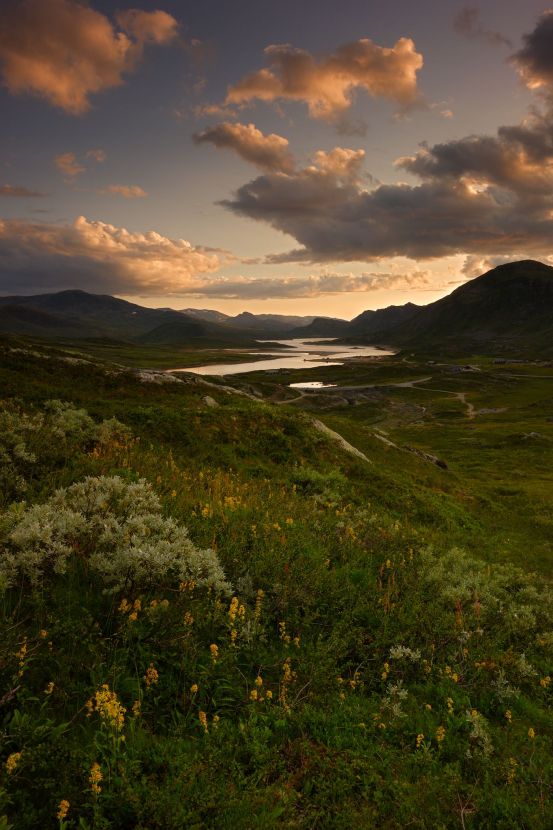 With this first «serious» photo of the trip done, it was time to prepare for the sunset photo of Bitihorn. I found a position with a good view to the south, and sheltered from the cool wind that was starting to pick up from the north. There were also several possible compositions, both wide and more close. I switched to my standard lens, the Canon EF-S 15-85 mm. While waiting for the light, I used the 10 second timer to take a selfie. 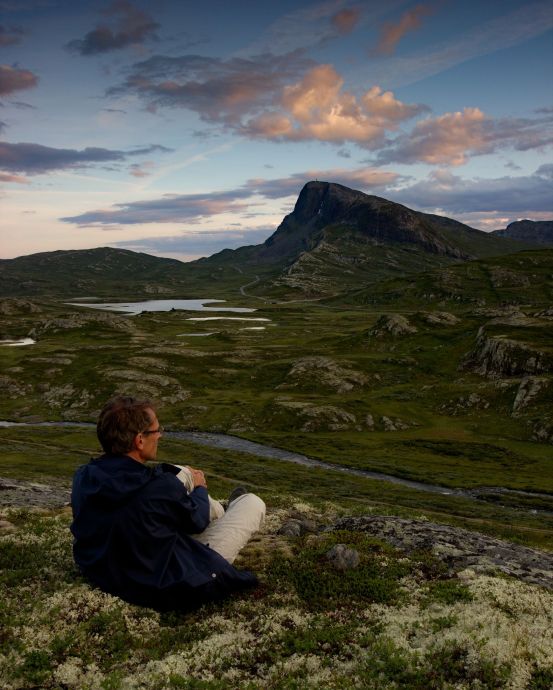 I knew that at the time of sunset, at around 10 pm, the sun would be blocked by the taller mountains of Jotunheimen, so my last chance of sunlight hitting Bitihorn would be some time before that. I wanted the last light hitting the top, and as much of the mountain as possible, so I watched closely, taking a photo whenever there was some sunlight. In the end, when the light finally hit the mountain top for a few minutes, there was no light anywhere else. I had another shot that I took a few minutes earlier, with sunlight hitting a small ridge at the foot of the mountain. In the final image I blended in a bit of this one to get the effect that I wanted. I used no filters on this one, but I bracketed with two stops on either side to get both the bright sky and clouds and the shadowed side of the mountain well exposed. 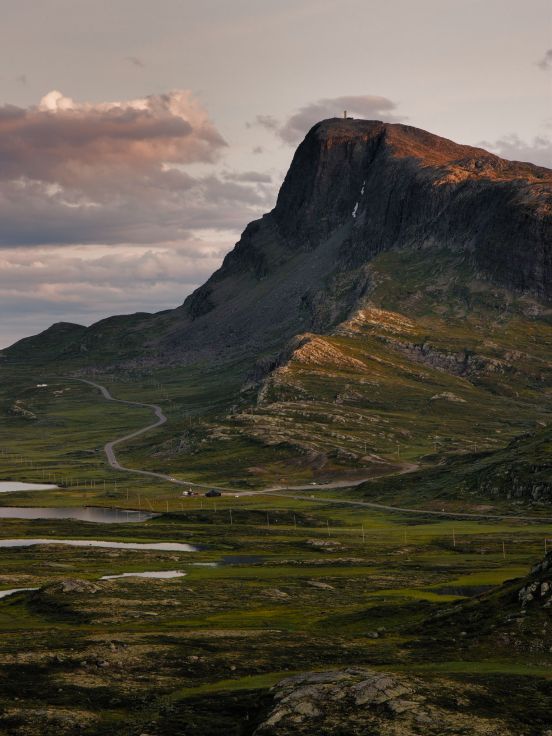 It was such a beautiful night, and I was really enjoying the solitude and the quietness. There was a small river flowing by beneath me, providing the sound track. I could not hear cars passing on the road, only the occasional motorcycle. While I was sitting there and the light faded away I found myself thinking about life, the universe and everything, and as always, the answer was 42.

Jokes aside. From time to time a car passed on the road. There wasn’t much traffic, but a few minutes between each. And the way the road winded along the foot of Bitihorn gave me an idea for another photo. A long exposure with light trails. I put on a 2-stop grad to hold back what was left of light in the sky, and also a 6-stop ND to get long exposure times while it was still not very dark. Since the cars were so few and far between, I would need to follow one car the whole way, and that meant an exposure time of about two minutes. I also chose an aperture of f/8 for maximum sharpness. I don’t remember now if I used the 6-stop on the final image, but the graduated filter is there. I’m not quite sure it was necessary in the end, though. 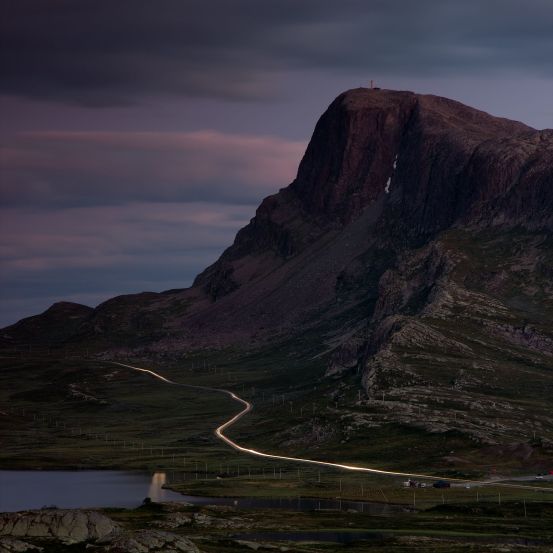 I like this image very much, I think it is my favourite from this trip. The light trail reminds me of a diamond necklace, framing the peak of Bitihorn.

By now it was almost getting dark. There was just enough light to find my way back to the car. I drove a few kilometers further, then I found a parking lot and tried to get a few hours of rest before sunrise.

If you have been with me so far, then please stay tuned for Part 2, about the following morning’s sunrise shoot.

3 kommentarer om “A summer night in the mountains. Part 1/2, Sunset”